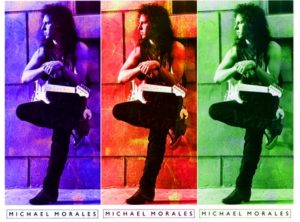 “From Church to MTV – The Journey of Michael Morales”

We are excited to begin our second season of Hidden Histories with a profile and interview with San Antonio musician and producer Michael Morales. Michael’s career begins with his family’s musical legacy – as radio performers in the 50’s and 60’s and as musicians in many of the Westside’s Methodist Churches.  This episode explores his path from family church musician to the flash and smoke-machine infused world of MTV.
More About This Episode >

This edition of HIDDEN HISTORIES features conversations with two historians 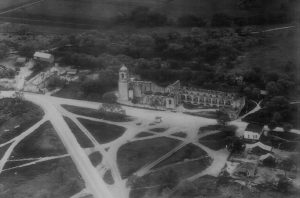 and archivists that are leading the effort to create The Bexar County Archives as a internationally recognized research facility. Dr. Felix Almaraz, Chairman of the Bexar County Historical Commission and Dr. Sharon Skobarcek, of the History Appreciation Committee of the BCHC, will offer ideas on how the paperwork of everyday life –a the letters, the receipts, diaries and more help us understand the lives of people who shaped our local history. This episode will include a short tour of the Texas A&M archives which includes the full archives of the Daughters of the Texas Revolution which was removed from the Alamo Library when the Texas General Land Office took control of the property.
More About This Episode > 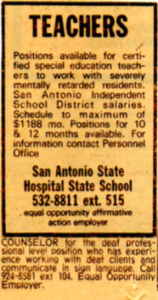 In the history of civil rights struggles within schools, issues of racial integration and bilingual ed figure far more prominently than the effort to make public education accessible to children with disabilities. The May 2019 episode of Hidden Histories explores this largely unsung story as it unfolded throughout South Texas, featuring oral histories of teachers and students who lived through the profound transformations in access to American schools following the 1975 passage of PL 92-142, the Education for all Handicapped Children Act. Guest commentary by former special education teacher and disability rights lawyer Karen Seal.
More About This Episode >

“Priesthood of the People: Community Legacies of Vatican II” 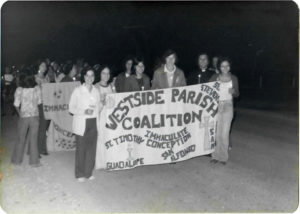 From 1962-1965, the Second Ecumenical Council of the Vatican—aka Vatican II—shook the world by convening Catholic clergy from all over the world to reflect on how the Church should interact with the forces of the modern world. In the following decades, this new openness would ripple outward to local parishes, including those here in San Antonio. According to Father David Garcia—Administrator of Mission Concepcion, Director of the Old Spanish Missions in San Antonio, and this month’s guest commentator—Vatican II created a “priesthood of the people” that led to masses in Spanish as well as English, celebrations of Guadalupe, and numerous organizations both inside and outside the church dedicated to new values of community engagement and social change. Ultimately, this shift in mindset within the Church would change the course of San Antonio political history, influencing the formation of numerous organizations such as Las Hermanas, PADRES, and COPS/Metro, which even today is on the forefront of local struggles for social justice and political representation. Sister Yolanda Tarango of the Sisters of Charity of the Incarnate Word provides additional commentary.
More About This Episode > 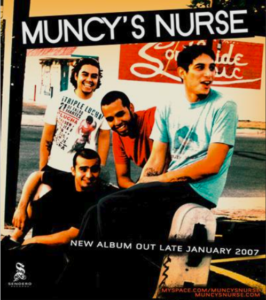 “Something’s in the Water: Origins of the Southside Sound”

San Antonio’s Southside, particularly its high schools, has long been a hotbed of musicianship in the city’s music scene. Though the Westside sound is more well known, this month’s episode investigates the roots and ripple effects of the Southside sound. Is it something in the water? Join us for a dialogue between a veterano of the Southside scene–Ramon Hernandez, curator of the Hispanic Entertainment Archives–and two of this generation’s up-and-comers: electronic artist Alyson Alonzo and Julio Lopez of critically acclaimed conjunto punk band Los de Esta Noche.
More About This Episode > 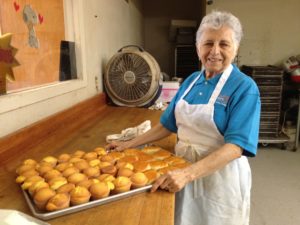 From conchas to cuernitos, pan dulce—Mexican sweet bread—is a daily pleasure of San Antonio meetings and family gatherings. But how much do we really know about its deep cultural and historical roots, much less its thousands of varieties and names? In August’s episode of Hidden Histories, we speak with UTSA professor emerita Ellen Riojas Clark about her latest book project, which explores the cultural history of pan dulce, venturing into her kitchen to learn baking techniques from “El Joven Panadero” Logan Iruegas and chatting with Patricia Bedoy, co-owner of Bedoy’s Bakery. Live studio audience will enjoy free samples!
More About This Episode > 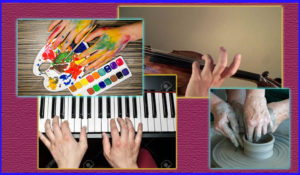 When we think of the “labor” in Labor Day, we imagine waiting tables, working construction or cleaning hotel rooms—seldom playing an instrument, writing, painting or dancing. As a result, we erase the unrecognized (and often unpaid) value of the labor artists perform, not to mention the working conditions many artists face in their day jobs. In honor of Labor Day, September’s episode of Hidden Histories seeks to recognize the “working artists” of San Antonio, asking: How do artists make a living? Exploring the wide range of lived responses to that question, we talk with musicians who gig and teach, poets who work at call centers, writers who teach online, pianists who play in bank lobbies, and trumpeters organizing for better pay and conditions as part of the local musicians’ union. Finally, reprising our homage to Studs Terkel’s Working, September’s episode also presents a new collection of short film interviews with a range of San Antonio residents on one question: What was your first job?
More About This Episode > 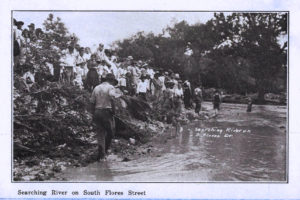 On the heels of the Global Climate Strike, October’s episode of Hidden Histories tells the story of highly visible environmental struggles in South Texas around energy, water, and development through a novel lens—as early precursors of today’s climate activism. Curated by Greg Harman, Sierra Club organizer and Co-Editor of Deceleration, “Climate Thunder” explores COPS campaigns against CPS rate hikes in the 1970s; monkeywrenching activities to halt Northside clearcutting; and the fight against the Eastside’s “Dirty Deely” coal plant and the South Texas Nuclear Project on the Gulf Coast. Guests include Diana Lopez, director of Southwest Workers Union; TC Calvert of Neighborhoods First Alliance; Russell Seal of the Sierra Club; and UTSA professor Kenneth Walker, whose current research reimagines San Antonio’s historical struggles for equitable allocation of resources in response to extreme weather events through the lens of climate justice.

Also included in this month’s episode, representatives from the San Antonio Public Library and the Library Foundation will discuss efforts to expand SAPL’s Texana/Genealogy Department to include archives on the early Latino families of San Antonio.
More About This Episode >

“The Politics of Ink: Political Advertising in a Pre-Digital Epoch” 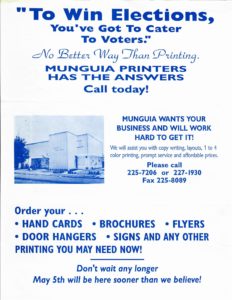 On the eve of Election Day, November’s episode of Hidden Histories delves into the archives of Ruben Munguia, exploring the role of print shops and print culture in electoral politics. From the early days of La Estrellita Printing Shop on Sunders Street, the Munguia family played an integral role in the emergence of political power on San Antonio’s West and Southsides. Whether printing picket signs for striking cigar workers and pecan shellers or palm cards for candidates running for school boards and city council, Munguia Printers provided low-cost and often donated content, design, and production services to local candidates and campaigns.

The willingness of citizens to come forth as candidates for public office is critical to the strength of democracy, yet history books and newspaper archives mainly document the winners and losers in the most visible elected contests. Seldom do we remember the names and faces of the thousands of people who annually run for offices that critically impact the community―as school and water board members, constables, justices of the peace, party officers, and others―yet remain beyond the horizon of public attention. It is in tribute to these candidates, both winners and losers, that the Munguia collection of photographs and campaign collateral becomes particularly significant. Guest commentators include Eddie Coy Ybarra, former co-owner of Munguia Printers, and Dr. Henry Flores, Distinguished University Research Professor Emeritus at St. Mary’s University.
More About This Episode >

“In the Key of Giving” 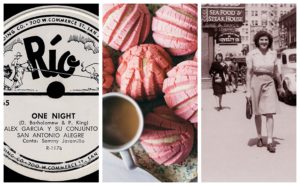 As the winter solstice approaches and the year slows to stillness, we close out the second season of Hidden Histories with the gift of local music, inviting performances from artists who appeared this past season. Performing on Monday, December 9th will be electronic artist Alyson Alonzo; Julio Lopez of Los de Esta Noche; and pianist Luvene Elias of the legendary San Anto doowop group The Royal Jesters. Also featured: Alexandra Van de Kamp, executive director of Gemini Ink, who will offer her literary recommendations for anyone looking for holiday gift ideas.
More About This Episode >